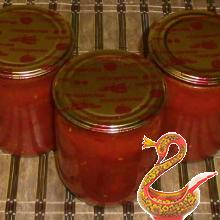 Canned (not fresh, although I wonder why) hot peppers, I really, really love. Moreover,  almost all males, by chance happened at my table  very happy to join in this addiction . And all would be well, such a division of the dishes on sex, but one day my wife said that would not mind to taste this dish, if I make it less "evil".

All said and done, this is why the current menu canned hot peppers in tomato sauce, in a version of "ultra light".
So, in order to prepare it you need:
• two pounds of hot pepper,

• a Cup of vegetable oil,

• another ordinary water (although if the tomatoes are strongly fleshy, this volume increase by half)

• and three, tablespoons of sugar.

That's all. Yes, from this amount produces seven a full half-liter cans, so if you want to get more or fewer – calculate the proportions yourself.
The "fire" part of the recipe is to peel and chop the pepper, so it's best to do it in rubber gloves. And we not only cut the green tail, but out of all the white veins and seeds. So our hot peppers in tomato sauce will be not so vigorous.

Tomatoes cut in half and grate so as to obtain a thick tomato juice.

It all together with salt, sugar, water and vegetable oil, put on the heat. The first reaction newcomers "Yes there is nothing to boil, one density" is wrong, because when heated, the mass becomes sufficiently liquid.

But do not overcook it, the peppers should remain tight, so exactly five minutes after boiling. Then lay it on the banks and close all airtight lids.

That's wisdom, Bon appétit.
And last. As shown, if this hot peppers in tomato sauce not to roll into jars and allow to cool, and even more – to stand a day in the fridge... Not going to comment anything more to say, just cook it and enjoy. Believe me, you will be very pleasantly surprised.