Pickled onions for the winter 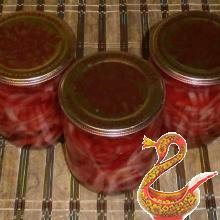 I really, really love pickled onions, in a variety of dishes, for example, in the same kebab. Moreover, salt-herring, it was such a simple addition, for me as a matter of course, and always an intrinsic component of the dish. But it was always only a part of a main dish, until one time I was with a friend at "garage parties" solely in the company of men, with their simple food brought in cans from home. And my sophisticated culinary experienced new taste , very simple dish: pickled onions for the winter.

And although you can cook it all year round, I did it in the autumn conservation.
So, to make six half-liter jars, you will need:
• 12 ... 15 (depending on size) large heads of onions,

• hot pepper (put it with seeds or without is up to you, but it is 100% natural preservative for similar dishes)

• vinegar – two thirds to a full Cup (depending on your preference),

• and six glasses (number of cans) of water for the marinade.

That's all.
And then everything is very simple. So the first thing put to boil three ... four liters of water. Peel onion and cut into large half-rings. The "sob" part of the recipe, so to avoid this, often rinse with cold water the blade.

Bow parsed into separate strips (don't place the whole semirings, then the less flood banks), put it into a saucepan, and fill with boiling water. After 15 ... 20 seconds, drain it in a colander, let them dry. So we get rid of unnecessary bitterness.

Peel the beets and grate on the fine grater. The taste of this vegetable will not change, but its give color.

In cans stacked red pepper and peppercorns, Bay leaf, onion (do not fill it tightly, just no), and set aside.

In parallel, prepare the brine. Salt, sugar and vinegar pour in some water and put on fire to boil. Then  boil for three minutes (the salt and sugar have completely dissolved),

fill the jars to the top (the main quantity of beet will remain on the bottom of the pan), and preserve. That's wisdom, delicious, crunchy pickled onions for the winter, ready. The only thing it needs at least a couple of months to stand in a dark place, so and put it away.

And the rest – Bon appétit.