Pickling cucumbers for the winter 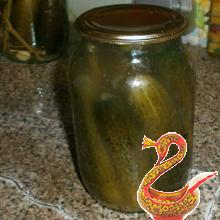 It is most convenient to salt 1 … 1,5 one-liter jars, but it is possible and in 3-liter banks, though as on me, it not the best option. After all each can, even in one party, turns out a little bit other than others (slightly more sharply pepper, more fragrant garlic or different parts of a leaf of a horse-radish), and the big can can simply become boring. Moreover, she can "explode" for only its known reason, and to throw out three liters of cucumbers always more pathetic, than liter. Therefore my choice – liter on a daily table, and for holidays and simply magnificent feasts – 1,5 liters. Especially it is always possible to open one more, in an okhotka.

But I distracted a little.
Carefully well we wash cucumbers, no dirt should get to banks. It is possible even to kill after purchase them for an hour - another in water in any high-capacity or it is simple in a sink if it at you is closed by a stopper.

Herbs will be necessary for salting the following: surely dry fennel (practically always is in ready sets for salting which can be bought in the market and in transitions) and horse-radish leaves. Further at will we add leaves of blackcurrant and cherry, it is possible to put branches of parsley, cilantro, but it gives rather specific aroma, on the fan. Though it is possible to make for test with it couple of cans, and to estimate for itself taste on the future in the winter.
From other spices – garlic, on each one-liter jar – 2 … 3 cloves (of course cleared), peppercorn (7 … 10 "balls") who loves more sharply – to steam of ringlets of hot red pepper who loves even more sharply, respectively we put more. For the main set of it it is quite enough.
Further in purely washed up banks we display cucumbers. At first on a bottom we place part of herbs: a few branches of fennel don't go too far), a slice of a leaf of a horse-radish, couple of leaves of blackcurrant, couple of leaves of cherry. Then we put cucumbers, it is possible equal ranks, as on

and it is possible, especially, if they small, and to outline as it will turn out. It is simple if to put them exactly, can enter more. Banks it is possible to put a little more herbs in the middle. Dry branches of fennel well enter intervals between cucumbers.
Now we prepare a brine in which they will be salted. On one liter of pure not boiled water (not on one one-liter jar of cucumbers, namely) we put on one liter of water 2 … 2,5 tablespoons of salt, simple stone, not extra, and it is stirred before almost full dissolution. The ugly deposit all the same small remains, it and isn't important, we will simply throw out it then. It isn't necessary to heat this brine at all, it is very important.
We start spilling the received mix on banks to the very top. Previously it is better to make banks on a baking sheet or in bowls, generally, in some capacities where then the part of a brine will be able to merge. If cucumbers densely of an upikhana in one-liter jars, one liter of a brine is enough approximately on 2,5 … the 3rd banks.
Now we leave cucumbers to be salted on 3 … 4 days. Term depends on that, how warmly at you on the street. If very much hot, it is necessary to roll up them no later than in three days, and they simply perekisnut that. If in your region summer not strongly hot, it is possible to leave and for four days.
Here is how cucumbers look every other day after salting,

and here so in three days, i.e. before roll-in.

Cucumbers stood, now came to close time them for the winter. We dress on bank a cover with holes, it is possible metal, as on

it is possible polyethylene, even it is simpler to buy it if you have no aluminum.
As we will merge liquid not hot, for from what material at you a cover, you shouldn't worry. We merge liquid in a sink, it isn't required to us any more. On banks in the course of salting the whitish raid, apparently on a photo can be formed. At plum it is also best of all to remove it accurately, or it will merge together with liquid.

In a pan we pour clear water and we put on fire. We bring to boiling. Again in water we fill up salt, now approximately is twice less, than at the beginning of salting, that is one … one and a half tablespoons on one liter of water, but not on the same one-liter jar.
We fill in the begun to boil salty solution in banks,

also we close by means of the zakatochny machine.

For pickles it is better to use simple banks with tin covers, but not so-called "twists" with the twisting covers. Owing to some reasons they stand worse, can start growing turbid or "poisoning" with a brine. Then they should be rolled. Perhaps, as the reason serves that the most part of contents banks – cucumbers of room temperature and when we fill in in them a hot brine, the general temperature in bank all the same not boiled water therefore covers "stick" worse. It almost doesn't happen to simple tin covers.
Our cucumbers are ready.

It is best of all to open them not earlier than fall if to try even in the summer, taste will remind them more fresh-salted. Not the best taste therefore cucumbers have to be stood.

It is better to store such cucumbers in a cool place, for example, in the cellar if someone was lucky and there is a cellar. Who has no such happiness, it is good for storage of preparations for the winter to buy the multichamber refrigerator. It is possible to store cucumbers and at the room temperature, but cucumbers nevertheless a product whimsical, can jerk if you incidentally didn't report on salt, for example.

Bon appetit to you in the fall, in the winter and even in the spring. It is necessary "to prolong" strongly pleasure whereas next year you surely increase number of similar parties of cucumbers. I do their three, as I recommend to you.

Read also about dry salting of cucumbers in a package - fresh-salted cucumbers turn out too notable.