Fritters of eggplant recipe with photos 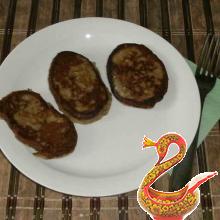 I bet that pumpkin pancakes are eaten (and not once), most of you. While the fritters of eggplant had a chance to try a much lower number of those who are now reading this. So today I will try to correct this injustice and to prepare this simple dish. Which will be equally appropriate as a side dish with almost any meat, poultry or fish, and as a standalone dish on your table. So just let's move from words to action,  and prepare these fritters eggplant - recipe with photos to help us.

So, we need:
• Two large (or three small) eggplant. They may even be a bit sluggish, still we bake.

• In addition to need average onions,

• a teaspoon without top of  salt,

• vegetable oil for frying. That's all.
The first thing take aubergines and bake until soft. For this pinned their (shallow, only to pierce the outer thick skin) to six ... eight places with a fork, and put into the oven: 180 degrees for 20 ... 25 minutes.

We absolutely no purpose to bring them to readiness, all the same, then they will be fried. But to cool them to room temperature, it is necessary. Just can get burned.
Take out the core (hard skin we no longer need, it has fulfilled its function), and grind together with the onion.

Add the flour, egg, salt and mix well (especially from the bottom),

and 15 ... 20 minutes, allow to stand. The taste of the finished dish is not affected, but the pancakes turn out so much more elaborate.

Heat the frying pan and pour in vegetable oil. And be sure to fry all the time on medium heat so that the pancakes did not remain raw inside.
Tablespoon (perfect merc for similar dishes) put enough liquid, like thick cream, dough,

and two ... three minutes – turn over the eggplant is almost ready pancakes, and cook them another couple minutes.

Repeat the procedure, after all, would be unlikely to find such a large frying pan to fry at one time. Spread on a plate and then immediately served our pancakes eggplant, as they cool down fast enough. Although practice has shown that even cold, they are still, very, very tasty.

And the rest – Bon appétit.