Экзотические закуски / Tomatoes in own juice recipe for ages

Tomatoes in own juice recipe for ages 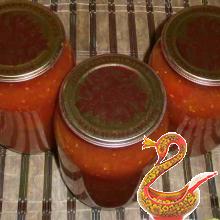 Delicious and very tender -  tomatoes in their juice. For me, this winterising has always been a certain model, a kind of pinnacle of culinary creativity in terms of conserves. And all because experienced housewivws (as it seemed to me then, though now I think they are just – "teapots with whistle") always said the same thing: this is the most capricious conservation, and from three cans before the season remains maximum one, or even no one. And I was saddened and alarmed.

But it was until the time, while one experienced cook (male) not assured me that it was all unwarranted fears, and 25 minutes right in front of me, he will prepare the tomatoes in their own juice for a perfect, win-win option. And none of cans will not turbid, no bulges, and even more, will not explode.
And a year later, when his assurances, I confirmed my practical experiences, I want to share with you. This simple but very effective recipe for the simplest  tomatoes in their own juice.
So, you will need:
• four kilograms of tomatoes (mixed, even if bent, still you will sort them at the sink),

• and the same number of bayberry.

That's all. Oh, I forgot to say that this proportion for three-liter jars, so if you took the tomatoes the other weight – calculate yourselves.
We wash tomatoes. Small and dense tomatoes immediately put into jars and fill with boiling water,

and those that were not "natural selection", let the juice. But to do it in a meat grinder, juicer or just grated – decide yourself. It will not change the final taste of our tomatoes in own juice.

Mix  tomato juice with salt, sugar, spices, and put the saucepan on the fire.

When it boils, remove the white foam (maybe it will need to be done several times, depending on what varieties of tomatoes), and cook it on small fire under the hood,  exactly 15 minutes.

Drain water from the tomatoes in jars, and now pour our tomato juice. Close airtight lids and put away in a dark place for at least two ... three months. And when in winter, you open a jar of tomatoes in own juice, you will get that...

But to find out what awaits you in the coveted jar, you have to make them yourself.
Bon appétit.