How to cook salted cucumbers 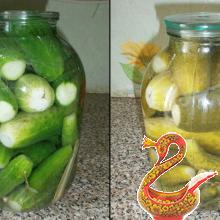 Summer. It is time for pickled cucumbers fast food when the ground is burning and  you want to do everything. There is every type of conservation  in the store – not a solution. How simple and fast to please yourself and your (and surely  somebody else) stomach fresh pickled cucumbers? Here is a simple recipe how to cook salted cucumbers. Though the recipe to call it difficult, but rather "a step by step guide for dummies", because it's not easy, but very simple.

On the bottom of a 3 litres jar put 5 cloves of garlic. Not clean (still not there), but push the blade of a knife. There also put some different greens for pickling – cherry leaves, stalks of fennel, horseradish leaves and black currants, in General, who he loves and who he would find. There is nothing – not a problem, though the taste will be poorer, cucumbers themselves will not become worse. There 5-7 balls of black pepper, two teaspoons of sugar, three teaspoons of salt. Who like less salt – put two.

Cucumbers. Someone who likes the pieces, someone entirely. Pieces cooked faster, the whole look better. The choice is yours. Only trim the butts and noses with them, so the pickling process will go much faster. If it is absolutely at odds of Your aesthetic perception (taste is not affected), prick the skin of each cucumber with a fork, 10-12 times. But close "to upihnut" them in a jar is not longer going to study, so just you asking, "how God blesses".

Now the fun part. Water. If you fill a normal room temperature water, the cucumbers will remain green, only slightly darkened. But the process of "malooley" will be longer. And if you use the boiling water, then after 2-3 hours (when the Bank has cooled to air temperature), they will turn yellow. The process will be faster, but the appearance will suffer (because we eat with your eyes first, and then the mouth and the stomach). And for those who are really "in a hurry to catch", expecting to get a treat ready in a few hours, add a couple tablespoons of vinegar. For marinating is too small amount, but the process will go much "fun". Now close the lid and shake stir the salt and sugar. Remember, they remained at the bottom? To leave under the cover or remove it – Your choice, but the first day, do not refrigerate, or the salting will last longer. Then – at Your discretion.

The duration of pickles. There are strictly "on taste and color", so try it. Usually, in cold water – 1...2 days, in boiling water – a day. But someone who likes salted insufficiently cucumbers, and someone-"to completely salty". See and try for yourself. The only advice – take one cucumber and cut it in half. The color and texture on the cut with fresh it was changed to "wet" – ready, no need to wait. Although it is the expectation when preparing the first Bank is the most painfully long.

Now the fun part. All cucumbers are eaten out of the jar, have fun. Pour the brine – in any case. Add the teaspoon of salt and tamp again cucumbers. Salting will go much faster, and in less than a day 3-liter Bank crunchy treats will be ready. And so – 3...4 times.

Read also about the dry pickling cucumbers in the package - salted cucumbers are also notable.