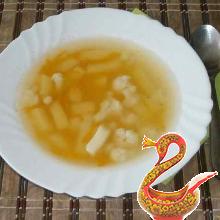 Both my son (I do not know who is the greater), hate all dishes of cauliflower. And that is not only their mother invented to fool them, and  mashed cauliflower, and ground finished dish blender, and pour all cream and other sauces ... but the same result: the same curve faces both at a table, the spoiled mood at mother and the strained voice at the father.
But one day, I tried to ask exactly why they do not like cauliflower, in general, and in the soup with cauliflower in particular. And I was very surprised with the answer: our mother overcook it, it becomes very slimy and not appetizing. That's all. And because the solution suggests itself, I went to the kitchen, especially since lunch time is inexorably approaching.

So let's cook Russian soup with cauliflower. And the first thing you need to cook broth. It can be absolutely  from any meat or poultry on the taste of the finished dish if it reflected, very slightly. So this time, I prepared  chicken.
A couple of good wings,

One medium onion (whole, right in the husk, then you take it out)

When the broth comes to a boil (be sure to remove  froth), in a small fire under the lid, boil it an hour ... hour and ten min.

When that time comes to an end, peel three large potatoes,

and cut rather short straw.

Big carrots (can take even two) too peel,

and ground on the most coarse grater. You can even take a knife for Korean carrot, but I simply could not find it in the kitchen.

We put everything in a pot, throw the onion, pour through a sieve (to our cabbage cauliflower we don't want black pepper) soup, and then set on fire. Just as it cooked (under the cover, after boiling - on low heat), preparing 20  ... 25 minutes.

and cut. But there is a little secret: they stalk much denser and thicker inflorescences, which means that they are unevenly welded. So the idea, just cut it will not be the best solution. So, cut them inflorescences, while the skeleton itself from cauliflower, and we will not need it.

We put them in a pot, bring to a boil, boil so two ... three minutes (the heat should be maximized)

and turn off the fire. So, our cauliflower soup should stand 10 more ... 15 minutes, and then it can be poured to the plates and enjoy the wonderful taste and wonderful density of all the ingredients, of which we have prepared them.