Экзотические закуски / Russian canned tomatoes and onions for the winter

Russian canned tomatoes and onions for the winter 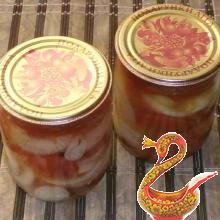 Every summer, when cooking in general and conservation harvesting the winter in particular, in me fighting two opposites. On the one hand - a burning desire to try something new, hitherto untested, and on the other - a complete unwillingness something vygotavlivat and do something even slightly complicated than usual. So when I came across this recipe exactly, it is entirely consistent with my notions about the ideal of conservation for the winter: simple, quickly prepared, and looks very appetizing.

And when he saw a friend of mine and I remembered that this in large numbers for many years his father was preparing for the winter, it believed in its most important quality: it is incredibly delicious. However, to verify this personally, I have to wait for the winter, as banks with canned tomatoes and onions for the winter, should stand up to this very winter.
The two main components, tomatoes,

and onions, we will need in the ratio of 2 to 1 (onions, of course, smaller). I "try", took two kilograms of tomatoes, and a kilo of onions. Especially the requirement for them there, but it's better to take them the same size. And tomatoes - a good tight, you can not even completely ripened, so they will be easier to cut.
Of this volume I have left eight half-liter cans, but you can turn seven, and nine, everything will depend on how close you are all stacked and how small were their vegetables. But: in any case, do not press them, the keyword - stacked and not upihivaete or trample down the contents.

In addition, you will need (based on a half-liter jar)
• two tablespoons of vinegar, though, and can take one if you do not like the taste too sharp,

• and it is only since the slide - sugar.

That's all cooking is finished, proceed directly to the cooking.
Put to boil two ... three liters of water (much is not enough), but in the meantime thick circles cut washed tomatoes

We put all the layers,

fall asleep, fill it with the marinade ingredients of the future, we had time to top up the top to boil water and put in a pot of water pasteurized.

After 15 minutes of boiling, the banks need to roll up tight lids and put into a dark place. Tomatoes and onions are ready for winter.

That's all wisdom, Enjoy your meal.