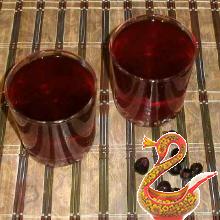 Jošt compote, or as it is often erroneously called jasper, I first tried in another house a few years ago. Imagine chilly, winter evening, when it is not what to go out, just come to the window in the house do not want to (not to be upset) and a modest kitchen, bachelor dinner: pasta, cooked sausage, tomato sauce of unknown bank-ketchup and this: a compote of Jošt. Its color is difficult to convey in words or pictures on display, it is necessary to see. Even a little murky glass into which he had poured.

Of course, my friend is not a bachelor, and does not live alone (otherwise, for whom it is prepared, and even in the winter), so he was able to clearly tell about this berry. What is a hybrid bred by breeders, it is very similar to gooseberries and black currants once, only bushes completely devoid of thorns, but are resistant to disease and cold. And though the last in the Crimea is not true, that is what it is. Yes, it is this berry grows at his dacha for many years. And seeing my interest and curiosity, I promised to call me next season.
So when six months later he called me to prepare compote of jasper, I did not hesitate, went to see him. But when I saw the list of ingredients, the berries themselves (they need to wash and sort out, but take your green tails and do not need)

it is strongly doubted that I see something new. After all, most of these three components, I always cook everything compote of berries and fruits. Moreover, my confidence in the further intensified when the banks for preserving he fell asleep on a third volume of berries and put water to boil. Sound familiar, does not it?
Jošt banks poured boiling water,

covered lids (and prepare you hardly will be a bank)

and ten ... twelve o'clock "forget" it, as the banks are not fully cooled.
Then, the liquid contents of the jars pour over boil, poured sugar at the rate of 150 grams per three-liter jar, pour the berries again (already with sugar), hermetically sealed with a lid and turning upside down, put cool.

All compote Jošt ready. But do not rush to open and drink it immediately. He must stand at least a couple of months, and even better for longer.

And although I strongly doubted that it would be "the same compote Jošt" friend reassured me: "Believe on the berry itself will do everything." And he did not per gram deceived me. And then in the winter you will have the most "sun in the bank", which will be not only delicious, but also incredibly beautiful. And it is you have prepared.
Bon Appetit.