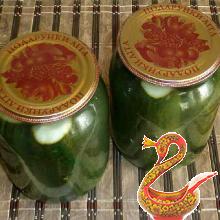 Pickles for the winter every year just great, my wife prepares. And I not only helps bring them home, rearrange the pantry jars ready for storage or more, but most importantly - I eat them in such an amount as it closes them. And her experiments to roll a little more, "sample", does not met: the new season - empty shelves. In contrast to pickled cucumbers in brine acetic she (and myself, to confess), I refer not always very good.
But one day I came across a recipe, where instead of the usual vinegar used citric acid.

And because in my mind it is always "was the second grade," because of indistinct origin, I took an ordinary lemon.

dill for pickling - one ... two umbrella

and the same - sugar. Everything.

Put to boil a liter of water, and prepare our own vegetables. Nothing wise - just good my cucumbers, cut off the nose and ass to better marinated,

and garlic to clean, and with a knife, we press. Done.

We put fennel, garlic and pepper on the bottom, top upihivaem cucumbers and pour boiling water over all. So our future pickles with citric acid should stand up and cool down three ... four hours.

Squeeze out the juice from the lemon.

His water discharged from the cucumber, salt and sugar are again set on fire.

Once the brine to boil, pour it into jars,

and rolls them. When pickles with citric acid cooled, they will brighten a bit, but do not be extremely yellow. The only thing - they should stand a couple of months to get a taste of their brine become one and want to eat more and more.

That's all wisdom, Enjoy your meal.